The origin and end of the personell union is quite confusion, so this page is dedicated to bring some light into it. Information about the different Electors and Kings of Hanover, and the House of Hanover (Guelphs) in special can be obtained on the site of HRH, Prince Heinrich of Hanover at http://www.welfen.de

In 1689 King Jacob II. of England was de-croned. As he was the last protestantic member of the house of Stuart, the husband of his sister was made king. William of Oranien was without children, and King Jacobs other sister, Anne became Queen in 1702. Anne did have neither a husband nor children - the House of Stuarts had come to an end with the death of Queen Anne in 1714, because the catholic mebers of this family had no right to become kings. The aunt of King Jacob, Elisabeth, was married to Elector Friedrich V. of Pfalz ("Winterking of Bohemia). Their male descendants were all dead when Anne had died in 1714. Only their 12th daughter Sophie, married to Elector Ernst August of Hanover was still alive. Sophie refused to be Queen in favourite to her son, Georg Ludwig. Since 1698 Georg Ludwig was Elector of Hanover, in 1714 he also became King George I. of England. 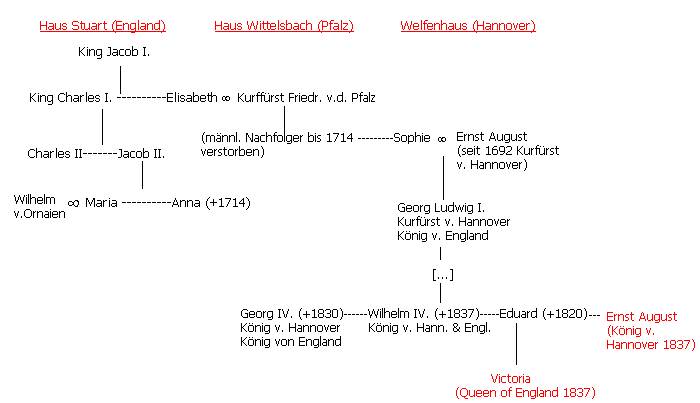 When King George III. of Hanover and England died in 1829, his eldest son became King George IV. of both the countries. George IV. had no decendants, and his younger brother William was pronounced King. Also William had no children until he passed away in 1837. His younger brother Duke Edward of Kent (one daughter - Victoria) had already died, but not the next younger brother, Duke Ernst August of Cumberland. This was time when the different rules of sucession in Hanover and England appeared. In England, Edward's daughter, Victoria, was coronated. She could not become Queen of Hanover, as the rule only let women become Queen, when all male descendants had died. So her uncle, Duke Ernst August of Cumberland become King of Hanover.

Medical scientists of the University of California at Berkely and the University of Lancaster examined this desease with the European aristocracy. Thereby, they found out, that wether Victoria's father, nor his family has ever had this illness. Also her mother's family (Victoria-Maria of Saxe-Coburg-Saalfeld) has never suffered from Haemophilia. Either Queen Victoria had a mutation in her Genes (with a possibility of 1:50000) or at least one of her parents weren't her parent. The fact that the house's friend, Captain John Conroy married her mother after Duke Edward's death, the scientist think of him as her real father. The corpses of the Royal British Family are kept within sarcopharcs made of lead, so it would still be possible today, to take out some tissue and make a DNA-test (like a fathership-test). Nowaday's Queen Elizabeth II. didn't allow the scientists to do so - if it would have come out, that Queen Victoria was illgitimate, the Personell Union between Hanover and Great Britain never should have come to an end.

... And the present Guelph descendant of the Hanoverian Royal Family would de Britain's next King...

An article on this topic was published in the Sunday's issue by "The Times" on July 9th, 1995