Flags of the State

Before King Ernst August made the colours yellow and white the official Statecolours, there had not been any official Flag of the State by law.

In the times of both, the Electorate and Kingdom of Hanover until 1837, mostly a red flag with the white, wide-jumping horse (Horse of Saxons) over green ground was displayed.1

The ground beneath the horse is important, since it was used only during the independance of Hanover until 1866 and from 1946-1952. During the times of the 80 years lasting Prussian occupation, the horse was used without a ground. Exception: the flags displayed on ships.

The colours yellow and white were found before 1837, too. They were used in military flags, symbols and uniforms' ornaments as well as in civil flags.

King Ernst August of Hanover officially introduced yellow&white after the personell union with Great Britain had come to an end. However, these Flag was found very variously. Still, there were some mainly used types:

- a yellow&white flag with a white, wide-jumping horse (on ground!) within a red shield.1

- just like above, but with a crone on top of the shield. This one seems to be the mostly used type.1

Other varieties had just the horse on yellow&white - without the shield for example.

After 1851 King Georg V. of Hanover introduced a "State- and Governmetflag". This one was like the Great Coat of Arms, but without lion, unicorn, mottos, and crone above the arms (see "home"). It was used on castles and official buildings during the King's presence. However, the yellow&white flag still was valid.2/3

After Hanover's annexion by the Prussians, there was no flag for the Prussian Province of Hanover for the first years. In 1873, a provincial coat of arms was designed. This one did not show the white horse, but a blue lion, the so-called Lion of Lüneburg. The reason: Still the guelph-loving Hanoverians carried the white horse on the traditional flags, and the Prussian government did not want to let their symbols into their arms. This regulation lasted until 1881, when the Provincial Government in Hanover-City voted against this design. Now, a simple wide-jumping white horse - without ground! - within a red shield was made the province's coat of arms.3 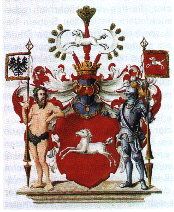 The problem with the traditonal coat of arms was the same as the new province's flag. As yellow&white with a horse was the symbol of the Guelphs' Empire and still rembered and loved by the Hanoverians, the Prussian Government in Berlin decided against it. To make some kind of compromise, they let the province have the stand-alone yellow&white flag.3

After the liberation of Germany from the Nazi regime by the Allied Forces, the British Military Government in northern Germany made the former Prussian Province of Hanover become an independant state on August 23rd, 1946. The first Premierminister of the State of Hanover, Mr Hinrich-Wilhelm Kopf introduced the new flag of the State of Hanover during the first session the state's parliament. This flag was designed after the electoral flags of the 18th century.4 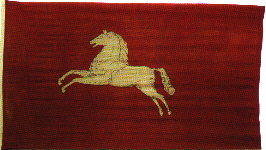 On November, 1st 1946, the States of Braunschweig (Brunswick), Hanover, Oldenburg, and Schaumburg-Lippe fusioned to nowadays Germany's Federal State of Niedersachsen (Lower Saxony). However, a yellow&white flag with a white horse on a red shield (without crone) was used until 1952. This one can be seen within lots of documenary films about the first years of the Federal Republic of Germany.

As no part of the new Federal State of Lower Saxony should have had an advantage with the State's flag, Lower Saxony's parliament made it a law, that a different horse than the former Hanoverian horse was used in a red shield on the Republic's flag black-red-gold. However this law (Law for coat of arms, flags, and seals of the Federal State of Lower Saxony) also said, that the old flags, i.e. yellow&white for Hanover, shall be used as well as official flags of the parts of the Federal States. For example, during festivals in Uelzen, Celle, and Ebstorf, this flag is still displayed on the streets and at official buildings. As it is cheaper, the arms in this flag is often the "normal" Lower Saxony's horse.